For the first time since 2015, there was a year-over-year decline in the number of data breaches reported to the Department of Health and Human Services’ Office for Civil Rights (OCR), albeit only by 1.13% with 707 data breaches of 500 or more records reported. Even with that reduction, 2022 still ranked as the second-worst-ever year in terms of the number of reported breaches.

As the year drew to an end, data breach numbers started to decline from a high of 75 data breaches in October. Time will tell whether this trend will continue in 2023, although the lull in data breaches appears to have continued so far this year with an atypically low number of breaches currently showing on the OCR data breach portal this month.

The theft of protected health information places patients and health plan members at risk of identity theft and fraud, but by far the biggest concern is the threat to patient safety. Cyberattacks on healthcare providers often cause IT system outages, which in many cases have lasted several weeks causing considerable disruption to patient care. While there have not been any known cases of cyberattacks directly causing fatalities, the lack of access to patient data causes diagnosis and treatment delays that affect patient outcomes. Multiple studies have identified an increase in mortality rates at hospitals following ransomware attacks and other major cyber incidents.

These cyberattacks and data breaches result in huge financial losses for healthcare organizations. The 2022 IBM cost of a data breach report indicates the average cost of a healthcare data breach increased to an all-time high of $10.1 million in 2023, although data breaches can be significantly more expensive. In addition to the considerable breach remediation costs, security must be improved, cyber insurance premiums increase, and it is now common for multiple class action lawsuits to be filed following data breaches. There is also a risk of financial penalties from regulators.

The largest ever healthcare data breach, suffered by Anthem Inc in 2015, affected 78.8 million members and cost the health insurer around $230 million in clean-up costs, $115 million to settle the lawsuits, $39.5 million to settle the state attorneys general investigation, and $16 million to resolve the OCR investigation. Even much smaller data breaches can prove incredibly costly. Scripps Health suffered a data breach of 1.2 million records in 2021 due to a ransomware attack. The attack caused losses in excess of $113 million due to lost business ($92 million) and the clean-up costs ($21 million). There are also several lawsuits outstanding and there could be regulatory fines.

There were 11 reported healthcare data breaches of more than 1 million records in 2022 and a further 14 data breaches of over 500,000 records. The majority of those breaches were hacking incidents, many of which involved ransomware or attempted extortion. Notable exceptions were several impermissible disclosure incidents that resulted from the use of pixels on websites. These third-party tracking technologies were added to websites to improve services and website functionality, but the data collected was inadvertently transmitted to third parties such as Meta and Google when users visited the websites while logged into their Google or Facebook accounts. The extent to which these tracking technologies have been used by healthcare organizations prompted OCR to issue guidance on these technologies, highlighting the considerable potential for HIPAA violations.

While 2022 saw some very large data breaches reported, the majority of reported data breaches were relatively small. 81% of the year’s data breaches involved fewer than 50,000 records, and 58% involved between 500 and 999 records. 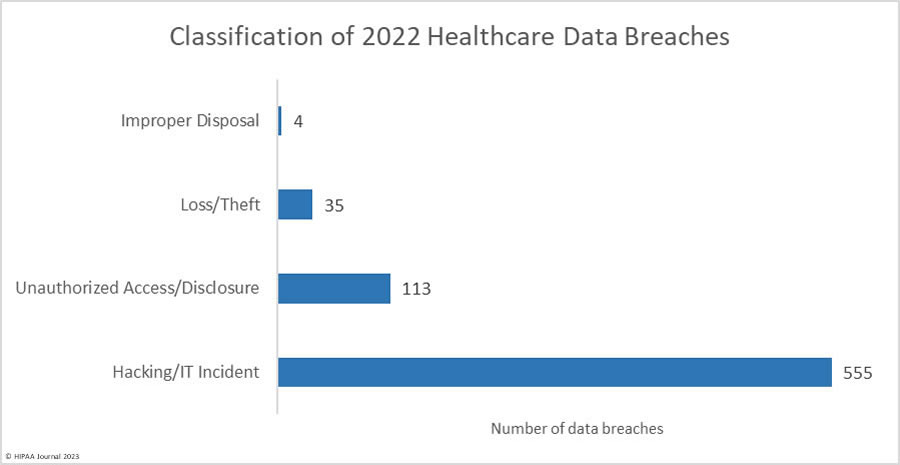 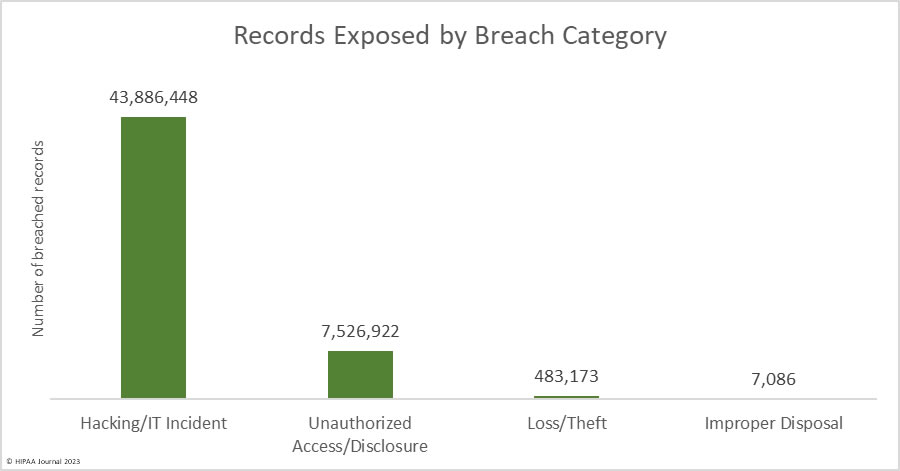 The high number of hacking incidents is reflected in the chart below, which shows the location of breached protected health information. Compromised email accounts remain a major source of data breaches, highlighting the importance of multi-factor authentication and training employees on how to recognize the signs of phishing.

Which Entities Suffered the Most Data Breaches? 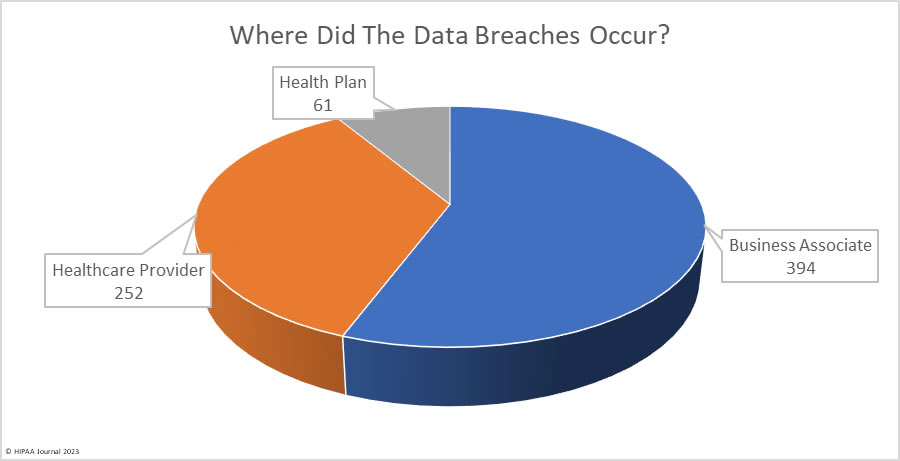 Several major business associate data breaches were reported to OCR in 2022, with some of the data breaches affecting several hundred healthcare organizations. A data breach at the debt collections company, Professional Finance Company, affected 657 of its healthcare clients and involved more than 1.91 million healthcare records. Eye Care Leaders, a provider of electronic health records to eye care providers, suffered a cyberattack that affected at least 41 eye care providers and exposed the data of almost 3.65 million patients. 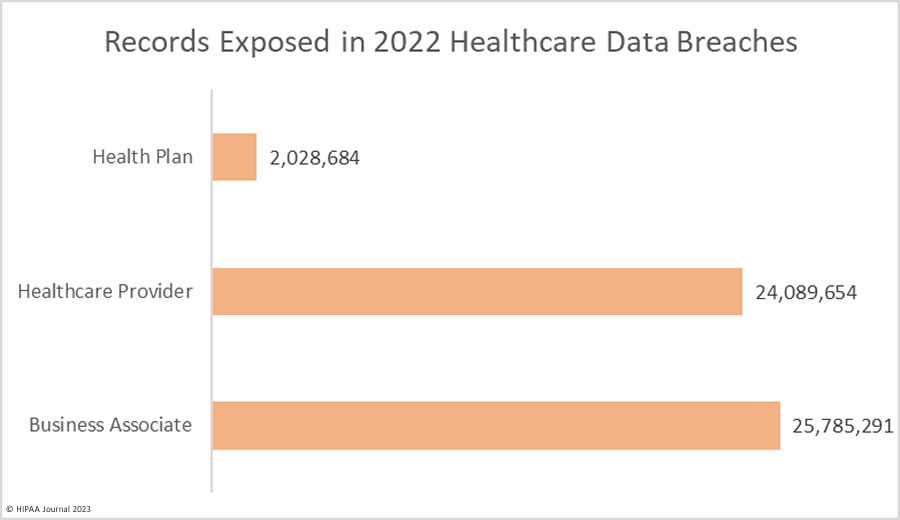 The graph below shows the sharp increase in data breaches at business associates in recent years. There are several reasons for the increase. Hackers have realized the value of conducting attacks on business associates. One successful attack can provide access to the data, and sometimes networks, of all of the vendor’s clients. Healthcare organizations are now using more vendors to manage administrative functions and risk increases in line with the number of vendors. As more vendors are used, it becomes harder to monitor cybersecurity at the vendors. Managing third-party risk is one of the biggest challenges for healthcare organizations in 2023.

Where Did the Data Breaches Occur?

HIPAA is primarily enforced by OCR, with state attorneys general also assisting with HIPAA enforcement. OCR imposed more financial penalties for HIPAA violations in 2022 than in any other year to date, with 22 investigations resulting in settlements or civil monetary penalties.

Since 2019, the majority of financial penalties imposed by OCR have been for HIPAA right of access violations, all of which stemmed from complaints from individual patients who had not been provided with their medical records within the allowed time frame. OCR continues to pursue financial penalties for other HIPAA violations, but these penalties are rare.