In October, 28 data breaches of 10,000 or more records were reported by HIPAA-regulated entities. The largest healthcare data breach reported in October – by some distance – was due to the use of Meta Pixel code on the website and patient portal of Advocate Aurora Health, which resulted in the impermissible disclosure of the PHI of up to 3 million patients to Meta/Facebook. Advocate Aurora Health was not alone. WakeMed Health and Hospitals reported a similar breach involving the PHI of 495,808 patients. Dozens of other healthcare providers have also used the code on their websites and lawsuits are mounting. Attorneys for Meta claim the company does not collect healthcare data without consent; however, U.S. District Judge William Orrick, who is presiding over a consolidated class action lawsuit against Meta over these impermissible disclosures, has expressed skepticism about those claims.

The data breach at SightCare Inc was due to a hacking incident at business associate USV Optical, a subsidiary of U.S. Vision, which also affected Nationwide Optometry. More than 700,000 records were compromised in the incident.  The third largest breach of the month occurred at CorrectCare Integrated Health, Inc, which provides administrative services to healthcare providers that serve correctional facilities. A database was exposed over the Internet as a result of a misconfiguration that resulted in the exposure of the PHI of at least 612,490 inmates at correctional facilities across the country.

Two more eye care providers confirmed in October that they had been affected by the ransomware attack on their EHR vendor, Eye Care Leaders. The records of at least 3,649,470 patients are now known to have been compromised in that attack. 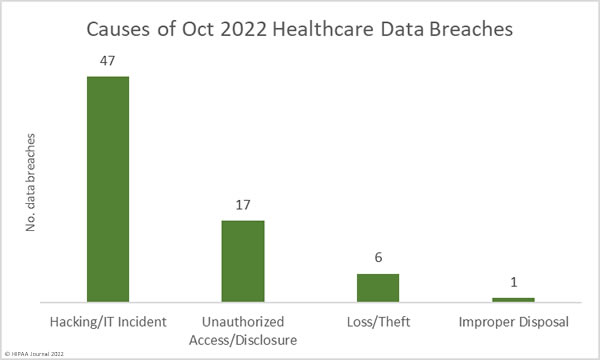 There were 6 loss/theft incidents reported in October (4 theft, 2 loss), all but one of which involved portable electronic devices that had not been encrypted. 67,244 records were exposed or stolen across these incidents. The average breach size was 11,207 records and the median breach size was 1,396 records. There was also one incident involving the improper disposal of paperwork that contained the PHI of 4,245 patients. 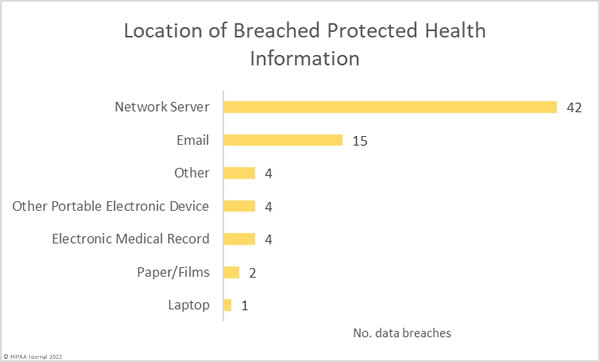 The most common location of breached PHI was network servers due to the high number of hacking incidents. Email accounts are also commonly targeted, with 15 incidents reported in October that involved compromised email accounts. Good password management and multifactor authentication can significantly improve defenses against these attacks, although phishing attacks that bypass MFA are increasing. The increase in these attacks prompted CISA to issue guidance on implementing phishing-resistant MFA this month. 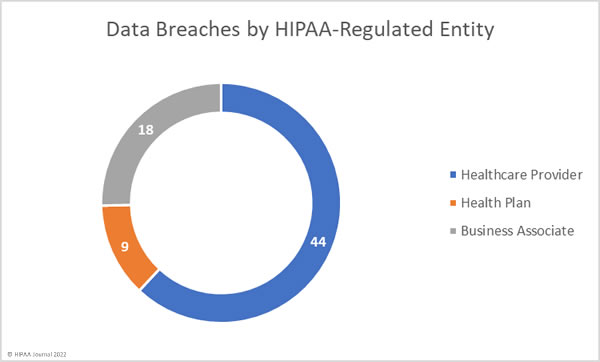 Data breaches of 500 or more records were reported by HIPAA-regulated entities in 30 states, with New York the worst affected state with 11 reported breaches. This was due to a data breach at a New York-based management company that affected multiple anesthesiology service providers.

No HIPAA enforcement actions were reported in October by the HHS Office for Civil Rights or State Attorneys general.